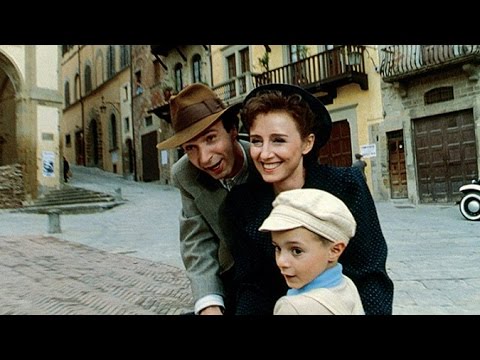 A review of the film “Life is Beautiful”.

This review was written by Maite Pariente Aylagas, an adult First Certificate Student at Mind the Gap.

“Life is Beautiful” is not only a touching story but a song about life and love. In an intelligent way, it reminds us that love always wins even in the most terrifying place in the world. It is an Italian film released in 1997; written, directed and starred by Roberto Benigni. The other two main stars are Nicoletta Braschi and Giorgi Cantarini. This film masterfully combines comedy, charm and war.

The film is set in 1930s Italy. The story starts when a Jewish librarian clumsily tries to seduce a young teacher. Little by little, she falls in love with him and finally they get married. Their happiness is complete when they have a son. Unfortunately, some years after, German forces occupy Italy and the Jews are taken to concentration camps. In an attempt to hold his family together and help his son to survive the horror of a Jewish concentration camp, he convinces his son that their time in the camp is a game, and moreover that the prize for winning is a tank.

The plot is intelligent, brilliant and impressive. Roberto Benigni makes such a masterful performance that he won an Oscar for best actor. We cannot forget the soundtrack; it fills every scene with the right emotion.

I would recommend the film to everyone because it is a true masterpiece of cinema. This film wonderfully conveys love, optimism and courage.