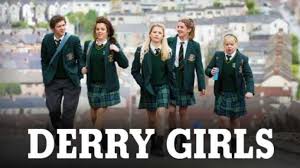 There are still weeks to go before we get back into our work and study routine. Are you bored already? Are you still locked up indoors trying to cool down? Are missing your English classes. Well, if you have answered “yes” to any of these questions, we recommend you make the most of your time and watch TV shows in English. Watching TV is a great way to improve your listening comprehension and to hear authentic English. TV series and shows are generally quite short so it isn’t too tiring to sit and watch an episode or two. Another great advantage is that you really get to know the characters and the storyline if you get hooked on one show. TV series are generally easy to follow and as most of them run for a number of seasons, watching a few episodes a week leads to regular listening and therefore, consistent progress. Aileen has very kindly chosen her Top 5 TV shows to watch this summer. We hope you enjoy them! Thanks Aileen! (P.S. I am a huge fan of Derry Girls too.)

Derry Girls (Netflix)
It’s the early 90s, the first day of school and a terrible start for 16-year-old Erin as she wakes up to find her cousin Orla reading her diary. And Granda Joe announces there’s a bomb on the bridge. … Hilarious comedy series following the antics of four Northern Irish teenagers.
Gentleman Jack (HBO)
Inspired by the epic true story of English landowner Anne Lister, and set in 1832, this HBO drama series follows Lister’s attempt to revitalize her inherited home, Shibden Hall – most notably for the time by taking a wife. Hugely entertaining and fast-paced, with fantastic acting from a great cast.
Years and Years (HBO)
The six-part series follows the British Manchester-based Lyons family. All their lives converge on one crucial night in 2019, and the story accelerates into the future, following the lives and loves of the Lyons over the next 15 years as Britain is rocked by unstable political, economic and technological advances. You’ll be hooked on this original, entertaining and thought-provoking show right from the beginning!
Comedians in Cars getting Coffee (Netflix)
Jerry Seinfeld’s roving talk show combines coffee, laughs and vintage cars into quirky, caffeine-fueled adventures with the sharpest minds in comedy. Episodes run between 15-20 minutes, and feature guests such as Jim Carrey, Kate McKinnon, Ricky Gervais, Eddie Murphy, Sarah Silverman, Barack Obama, Colleen Ballinger.
Friends (Netflix)
Iconic American comedy about six 20-30-year old friends living in the New York City borough of Manhattan. Six friends, one coffee shop, and countless hilarious moments.